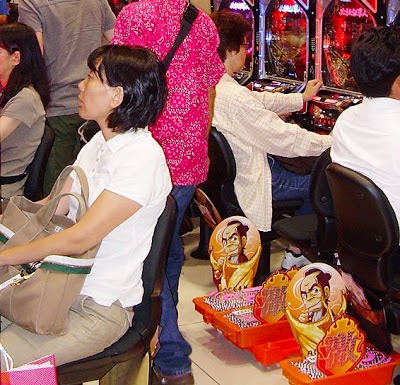 I'm not particularly good at tuning out loud and obnoxious stimuli. When I walk by something that smells bad, is very bright, or is loud, it's difficult for me to ignore it in the moment that I pass it. Pachinko was a nasty surprise package of all three of these things. It offended the eyes, the ears, and the nose (the cigarette smoke, not the unwashed masses therein). The only way it could have been worse was if someone was standing outside smacking me as I walked by.

Before I reflected back on this topic, I thought about whether or not a similarly annoying experience occurred to me in the U.S. The closest I think I can come is being in a car at night, but, even then, the issues are much more intermittent. There has to be a bit of a perfect storm for smelly exhaust, honking horns, and high beams to converge at the same time.

Whatever experiences may exist in the U.S. that can assault multiple senses at once, they're ones that I don't encounter on a regular basis. It was a daily occurrence for me to walk by Pachinko places (as they're near stations) and I definitely don't miss the assault that accompanied the brief stroll by one.
Posted by Orchid64 at 3:54 PM 1 comment:

Random Thoughts: The Middle of the Sidewalk 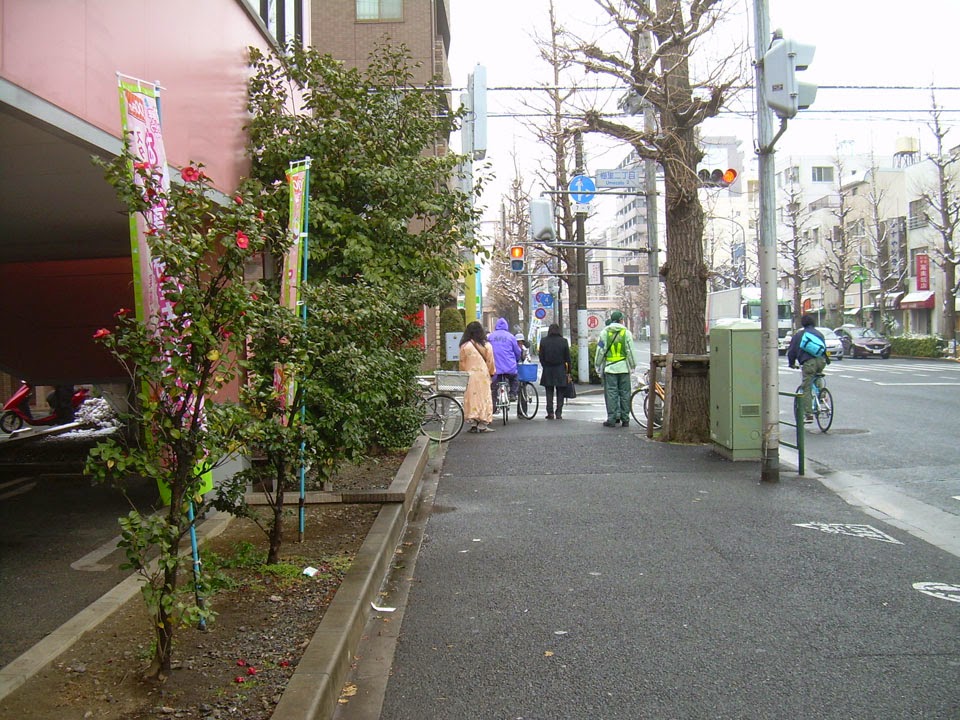 Seeing this picture of the sidewalk in Asagaya reminded me of the fact that Tokyo sidewalks are much wider than those in the U.S. I miss those sidewalks.

Recently, I was walking down a sidewalk of about average size and an older Asian man was coming the other way. I was walking on the right side and he was walking dead center down it. As I pondered the potential outcome of his approach should he stand his ground and I stand mine, I thought about whether or not I'd step out of the way if he decided that he was going to keep walking down the center. In the moment that my brain was processing those lightning fast thoughts, I concluded that I was not going to step off the sidewalk and walk in the grass (grass that was full of goose droppings as this was through a park) so this guy could walk down the middle as if he owned the entire thing.

As he got nearer to me and I didn't budge, he moved over and occupied the left side and we divided the space evenly between us as we passed one another. After this experience, which came and went in a few blinks of an eye (okay, maybe more like about 10 seconds), I thought about how things may have gone differently had someone of another ethnicity approached me while walking in the middle of a public space meant to be shared by everyone. The truth is that, had the other person been white, I would have done the same thing. However, had the other person been black, Hispanic, or any other ethnicity other than Asian or Caucasian, I would have moved onto the grass and allowed them to occupy the middle ground.

This thought was an interesting one and I believe that my "stubborn" insistence on equal division of the sidewalk with Asians (or Caucasians) was affected by my experiences in Tokyo. I spent over two decades around older males who arrogantly assumed they had the right of way, were entitled to as much space as they wanted to take, and who rarely, if ever, extended courtesy to those around them unless they were dealing with another man who was older than them or perceived as having higher status. I still see Asian males as acting entitled and believing they are superior to me and will take more than their share in my presence because I am a female and a minority, even though I have not necessarily experienced that in the U.S. at this point in time.

The fact that I believe I would have yielded to other minorities is the curious one in my estimation. I think that my sense with people who are neither Asian nor white is that they have had to step aside too many times already and that they've gotten less than their fair share over the years. I feel like they "deserve" more latitude, courtesy, and respect because history has given them so much less of these things than others. I will note that, in my experience so far, most white people are likely to yield prematurely and apologize when they aren't even in error. It's relatively rare to have a "turf war" with a Caucasian person in a public space, but that could be because I'm white, too. I can't not be white so I have no way of knowing if they treat minorities similarly.

One of the things that this brief experience made me think about is the sort of attitude that being in a minority group in a culture must engender over a lifetime of being treated with discrimination. Since I lived as a minority, and a particularly disempowered one, for so long, I developed an attitude when dealing with the majority in which I refused to surrender to their perceived authority or entitlement. Small experiences could become power struggles in which I wouldn't comply with their cultural imperatives or wishes as an act of rebellion. I needed those acts of rebellion because I had to prove to myself that I wasn't going to capitulate every single time my interests were at stake.

These small actions gave me a tiny sense of having some power at a time when I spent every day feeling powerless in much bigger and more important circumstances. While I couldn't stop store employees from following me around because they thought I was going to steal things or I couldn't force landlords to rent to me, I could stop some jerk from hogging the sidewalk or refuse to let him spread his legs so wide that he took up two seats on the train by just stubbornly refusing to physically accommodate him. I couldn't stop my employer from denying me legally mandated leave or benefits, but I could refuse to go to drinking parties or work on my days off (which nearly got me fired at one point).

As a result of this tug-of-war, one that I really was losing every single day, I spent a lot of years in Japan walking around mad - just mad. It took a very long time to stop being angry everyday because I was stared at, pointed at, bumped into by people who had no right to push me out of the way so they could get a superior situation, etc. There was not outlet for my sense that I suffered the inequality that I did. Foreigners in Japan are often apologists or deniers and the Japanese are utterly clueless or disinterested. There were no advocacy groups. I could not be heard and was shouted down (usually by other foreigners) on many occasions if I spoke or regarded as a drama queen or having a distorted perspective on what was occurring (usually by the Japanese). Years of not being heard only enhanced my sense of impotence in the society I was living in and kept my anger in play.

This is what happens to minorities when they are subjected to microaggressions or feel powerless or are treated disrespectfully on a daily basis. They're mad - everyday - much of the time - and in situations which seem trivial to those who have never walked a mile in their shoes. When you see a minority individual walking down the street with a nasty look on his or her face, I'm guessing that they are reacting to years of the sort of treatment that I had in Japan and the same sense that they cannot escape the reality of their world. It's partially a defense, but it's also part of a pattern of "winning" a few of the only types of "battles" that they have a chance of winning. You can't really know why they're so angry much of the time until you walk down a lot of sidewalks in their shoes. One of the more dubious "gifts" Japan gave me was a chance to occupy that place mentally and to know what it does to you psychologically.
Posted by Orchid64 at 9:53 AM 1 comment: