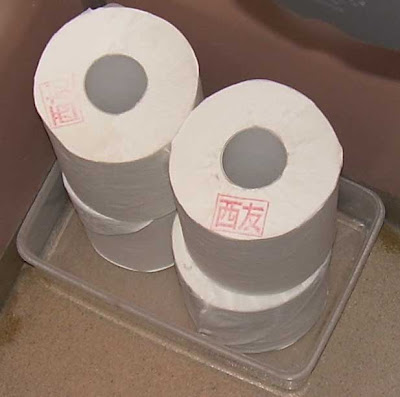 I can't tell you how many times I've read comments by foreigners who claim Japanese people are honest and don't commit crimes. In particular, there is a myth that they (by and large) do not steal. I've read people say that all the theft in Japan is carried out by Asian immigrants, particularly the Chinese residents. What is more, Japanese people often repeat this myth. Not only has there been an increase in shoplifting by Japanese people who are perfectly capable of paying for the goods they're taking (they have lots of money on them), but there are indications all around that Japanese people are not exactly paragons of virtue. For instance, the toilet paper at the local Seiyu supermarket has the characters for the store stamped on the top of it to dissuade people from pilfering it.

I won't miss the absurd myth that Japanese people are immune from the temptation to steal by virtue of their culture or blood.
Posted by Orchid64 at 12:01 AM