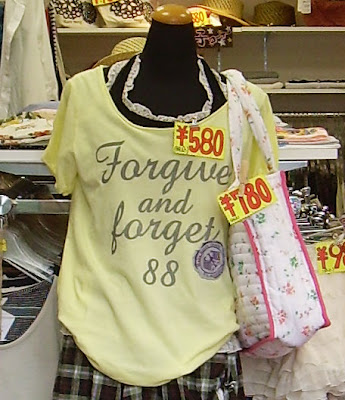 The Japanese are big into taking responsibility, but they are also very forgiving when you admit that you messed up. I'm sometimes floored by the mistakes or misunderstandings that are dismissed or utterly overlooked with the issuance of a simple apology and an explanation. This works not only on a personal level, but frequently on an official one. When my husband and I forgot on a couple of occasions to renew our alien registration cards or to update our visa status at the local government office, we just had to fill in a piece of paper with an apology and all was forgiven.* I've also been told that people who don't pay their city taxes have been let off the hook with little more than a sincere apology and confession that they didn't know about the need to do some particular bit of paperwork (which is actually true in the case of many foreigners in Japan).

I will miss this human and humane approach to forgiving people who make mistakes.

*I read about a year ago that this sort of easy forgiveness of forgetting to update your visa status at the local government office may be changing (and we may need to pay a fine if we don't do it on time), so don't act on my past experiences!
Posted by Orchid64 at 12:15 AM