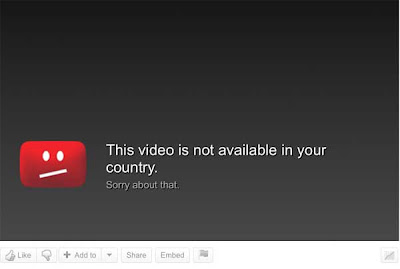 Occasionally, one of my friends will send a link to video that they believe I'd be interested in. On more than one occasion, such videos are a dead end for me because I am told that they cannot be viewed from my particular country. For the odd video here and there, this isn't too great an issue, but a lot of entire sites or services are blocked for Japan (ABC television network on-line shows, Hulu, etc.). After awhile, this starts to feel like there's a club which doesn't allow me admittance.

I won't miss video being blocked at my location, which happens to be Japan.
Posted by Orchid64 at 12:15 AM