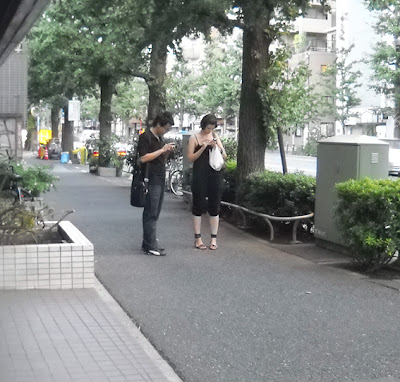 These two decided the best place to stop and mess with their cell phone messages was dead in the middle of the sidewalk. The angle makes it look bigger than it is. Trust me when I say that when they dead stopped in front of me that it was more than irritating going around them.

On New Year's Eve of 2010, I was heading into a Kinokuniya supermarket located in the basement of a building. I was making my way the only way one could, via a narrow escalator behind a long line of other people. When I say, "narrow", I mean that it was only wide enough for a single individual to stand on. It wasn't one of these deals where half of it is used for those taking the ride down and the other half could walk down the unoccupied half. It was one-person-wide. The upper-middle-aged specimen riding down in front of me decided that it would be in her best interest when she reached the bottom to simply stand there. She took a half-step off and dead-stopped. Now, I'm being carried forward by a motorized stairway and have nowhere to go but right into her back. I literally have no choice but to pile onto her or nudge her out of the way and try and get around her. I push her with the force of the escalator and she gets angry with me for having the audacity to do so. I'm not sure what she expected me to do. Was I supposed to turn around and start clambering over the people on the escalator behind me as it continued to move them steadily down?

People in Tokyo seem to think it's okay to dead stop just about anywhere and any time they please with absolutely no awareness of how their actions make it difficult or impossible for others to pass by, and I won't miss it.
Posted by Orchid64 at 8:00 AM