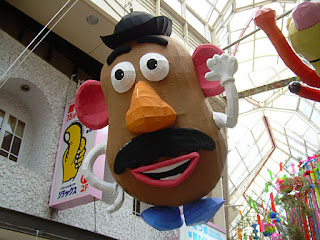 One of my (American) coworkers was talking to me about plastic surgery and I mentioned that, when I was  younger, I would have had a nose job because I didn't like what I considered to be my "big" nose. That is not to say that I have an enormous schnoz, but rather that like many young women, I craved a petit nose and would have like to have had it bobbed to fit into a particular aesthetic sensibility. I said that I was glad, in retrospect, that I didn't have the money to do it because, though I still think I have a big nose, I'm okay with it now. He remarked that the Japanese see noses such as mine as beautiful, and he was right. More than one Japanese woman has said that she envies me my "high" nose. Even though I heard this many times, it still shocked me as I think plenty of Western women would prefer the lesser bridge that many Japanese women possess.

Since I spent most of my life thinking my nose was unattractively too big, it was refreshing and somewhat gratifying to live in a culture which believed it added rather than subtracted from my appearance and I will miss that.
Posted by Orchid64 at 8:00 AM