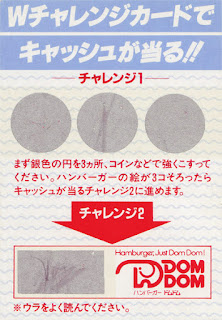 Some of my memories come second-hand via my husband, but that's okay. He doesn't mind my borrowing them and sharing them with my readers. This one comes from his second day on Japanese soil, August 8, 1987. He was in Okayama, which is about 336 miles or 542 km. from Tokyo, and taking part in training for his work for a company called AMVIC (which no longer exists by that name).

My then-boyfriend sent me a tape on which he talked in a very detailed fashion about his first and second days in Japan. The richness of the detail is something beyond that which most people are going to have access to, not to mention the feeling that they were impressions delivered in real time with the freshness of perspective intact. When you read words on a page, you read them in a voice and with a feeling of your choosing. When you listen to someone else talk, it maintains all of the integrity of the moment. The tapes are truly a gift from the past.

Among the many things my future husband talked about was his experience with the food in Japan. At that time, he was a mere 23 years old and had the limited range of tastes that one would expect from someone who was out of college, male, and never really embraced the idea that food was to be consumed for anything other than pleasure. I used to kid him a lot about how we'd have to make separate meals when we married. Little did I know that this was going to end up being the reality. To this day, more often than not, we eat different food at meals other than breakfast.

One of the things he said on the tape was that he made a critical error when ordering his first meal. He and other trainees went to a restaurant and he ordered something called a "mixed sandwich". He told me that he thought it sounded "safe", and later discovered that it was the last thing he'd want to eat. Though he didn't go into detail about what it was, I know now from experience that it is a typical Japanese sandwich made with white bread (crusts removed, of course) and then different fillings added to either side of a double decker sandwich. This wouldn't be so bad if it weren't for the fact that the favored contents of such sandwiches are potato salad, egg salad, tuna salad, and paper thin slices of ham with liberal amounts of mayo.

The second day, he and his cohorts went to a Japanese fast food place, called "Dom Dom" at which the options were a lot more promising. Dom Dom sounds like a S&M joint, but it's really just the umpteenth take on fast food in Japan. My research (which I would not quote in an academic paper as it tends to be on the sloppy side) revealed that it is the oldest native chain fast food establishment in Japan. It started in 1970 and the more popular and well-known Lotteria trailed it by 2 years.

Dom Dom's current menu includes teriyaki burgers as well as shrimp burgers and is closer to Mos Burger than McDonald's in its overall composition. The only item that caught my eye especially was a sweet potato pie. I never saw a Dom Dom when I was in Japan, even though they apparently have 100 locations at present. A lot of their restaurants are apparently in food courts and not in independent brick and mortar locations. They aren't available in Tokyo at any of the big ticket areas (Shibuya, Shinjuku, Tokyo, Ikebukuro, etc.).

My husband thought the burger he ordered was an average fast food burger. He ordered a "double burger", because they didn't offer a quarter pounder. Through sign language, he was able to ask them not to put mayonnaise on it and was impressed that they followed his instructions. He said, "half the time when I tell them to hold the mayo in America, I get mayonnaise." 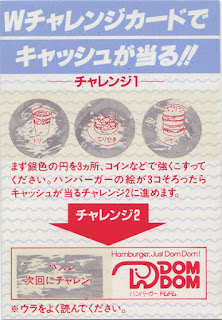 The scans that accompany this post are of two game cards that my future husband received and included with the historic tape mentioned earlier in this post. He scratched one card, though, by his own admission, he had no idea whether he had actually won one of the immensely valuable food prizes pictured on the card.

After all of these years, we can both look back and know the answer to a long unanswered questions. Did he win? No, he did not. The card says "hazure" which lets you know that you lost. Of course, the other card continues to remain a mystery and forever will. Like an unopened gift package, it will continue to hold unfulfilled promise, which is likely a far better reward than what it would actually reveal.
Posted by Orchid64 at 8:00 AM