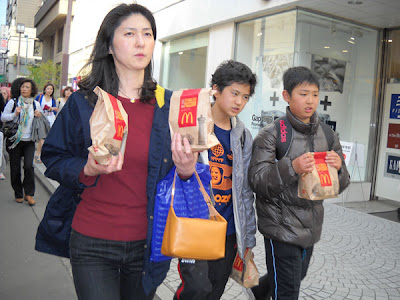 Japanese people have been getting heavier as the decades roll by, and if you ask them why, most of them will blame Western food. In particular, they, and many foreigners who live here, will blame the encroachment of American fast food places like McDonald's, Pizza Hut, and KFC. Many hiss and boo at the United States and blame them for distorting the traditional Japanese diet and making the Japanese fatter. To me, this is like blaming the Belgians (for French fries) for Americans becoming fatter. You can lead a person to a fast food place, but you can't make him eat. The Japanese are responsible for patronizing American fast food, making it wildly popular, and getting fatter as a result, not the Americans who offered this slice of culture for their sampling. To assert otherwise would imply that the Japanese are mindless sheep who lack the will to resist whatever is placed before them. They, like every other citizen of every other free country, make their own choices and that includes whatever greasy globs they send down their gullets.

I won't miss the tendency to blame this problem on America.
Posted by Orchid64 at 12:15 AM