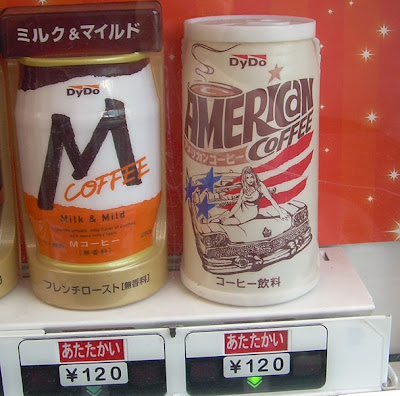 There are a lot of products in Japan which have the prefix "American" which are nothing at all like what is sold in America. For instance, a weird batter-dipped hot dog (resembling a corn dog, but not really the same thing) is sold as an "American dog" and there are Tabasco-flavored chips sold as "American Potato Chips." One of the most pervasive ones is "American coffee", which is rather watered-down coffee that is too weak. Japanese people don't seem to realize that the things marketed in their culture as "American" are not the same preparations as those actually sold in America.

I often get a kick out of what the Japanese believe is American, and the types of products that are incorrectly assigned the "American" label.
Posted by Orchid64 at 12:15 AM