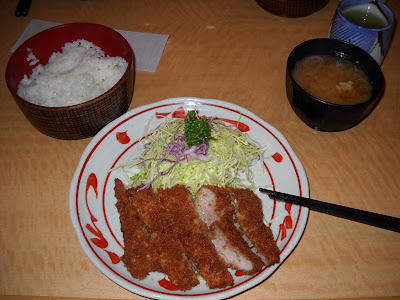 There is a type of cuisine in Japan called "yoshoku", which is influenced by Western cooking practices and was developed during the Meiji restoration in the 1800's in Japan. At that time, the emperor ended Japan's isolation and incorporated aspects of Western culture into Japanese life. One of the many results of that is tonkatsu, or pork cutlet. It is a piece of pork (or sometimes chicken) which is breaded and fried, served with cabbage, rice, and often miso soup. It is served with a unique sauce which is slightly sweet and spicy. The entire meal is a wonderful combination of Japanese and Western food that is easy for Western palates to accept.

Though I tried tonkatsu in America (prepared at a Japanese restaurant), I found if very inadequate next to what I've had in Japan, and I'm going to miss it.
Posted by Orchid64 at 12:15 AM