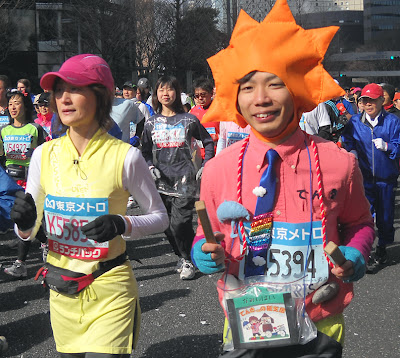 I don't have anything against marathon runners and I'm sure that there are people who have to drive their cars through the path the Tokyo marathon takes who have far better reasons to be annoyed than me. That being said, there are things about it which are irritating. First, those who want to take part in it talk about it. A lot. Too damn much. They do this because you have to win a lottery to be allowed in and they want to be one of the lucky ones so they ruminate on it. A lot. Too damn much. Second, there is the fact that the lottery allows for a disproportionate number of foreign runners into the race for reasons I'm uncertain of. I don't want foreigners to be discriminated against, but I also don't want them to be treated in a manner which is unfairly favorable. This isn't an affirmative action move, trust me. It's more likely a crass PR one. Finally, the thing which I dislike most about the Tokyo marathon is the fact that everyone thinks it's a rocking great idea to run with their freak flag flapping in the breeze. It's amusing when a few people dress silly, but less so when a sizable portion do so. One guy with bunny ears is wacky. A few dozen is just boring and tedious.

For all of the aforementioned reasons, I won't miss the Tokyo marathon.
Posted by Orchid64 at 12:15 AM