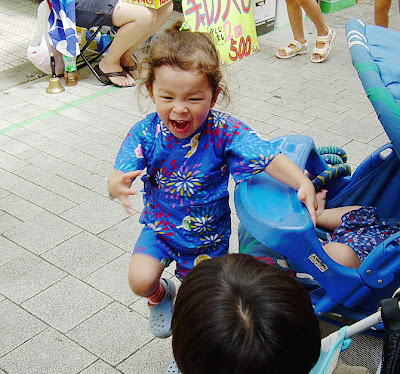 Japanese kids are far more likely to stare, point, or obviously direct their attention toward foreigners. They have less control over their behavior, and frankly, a lot of their parents don't do much to break them of their bad habits. Given that kids are acting impulsively, you have several options to deal with them. You can ignore them. You can pointlessly get angry, or you can do something innocuous which 80% of the time will freak them out. I've taken to smiling, waving at them, and saying, "hello". More often than not, this will send them running away from you in the opposite direction. Sometimes they'll wave back and then run, and sometimes they'll just flee in terror.

I'll miss being able to freak kids out like this merely by being friendly.
Posted by Orchid64 at 12:01 AM