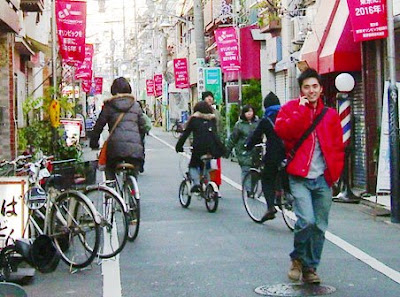 About 90% of people on bicycles are generally not too obnoxious, but there is a minority which feels that the sidewalk belongs to them and aggressively ring their bells from a mile away in a vain attempt to clear the path ahead. They do this so they can barrel down the street without stopping. Some older men actually ring their bells constantly with a few seconds between each ring as they head down the street. They are the worst because they do this whether someone is in their way or not.

I won't miss these people who lay on the bicycle bell because they feel the roads and sidewalks belong to them and everyone should be making way for them at all times.
Posted by Orchid64 at 12:01 AM