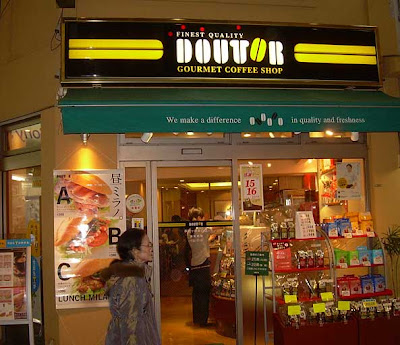 There are a lot of coffee shop chains in Tokyo including Starbucks and Starbucks wannabes. Before the Seattle coffee invasion, there was Doutor. Frankly, I've rarely had their coffee (and thought it was just "okay" when I did have it), but I love their freshly made, somewhat elegant, warm and not gut-busting sandwiches. They used to have a chicken bagel sandwich which had a soft, toasted bagel and white meat chicken with cucumber, lettuce and mayonnaise that was only about 260 calories. Now, they have relatively modest and tasty roast chicken calzone (241 calories!) which I'll indulge in on those rare days when I'm not up to making my own lunch. On those occasions when I have wanted a sandwich which was more than crust-less white bread with mayo-filled goo squirted into it (aka, the usual Japanese sandwiches), I've always gone to Doutor.*

*Note that I realize Subway has decent sandwiches, though the bread is nicer at Doutor, but there's no Subway in my area.
Posted by Orchid64 at 12:15 AM