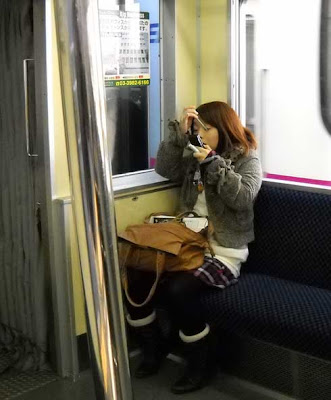 Japanese people will tell you that they don't like to see women putting their makeup on when they ride the trains and that it is bad manners. The thing is that it not only doesn't bother me, but I get a kick out of it for several reasons. First of all, there is a certain amount of risk undertaken when you put objects near your eyes on a moving train. Second, it requires some pretty spiffy dexterity to draw anything on your face while the train lurches and bounces. Finally, as "manners" issues go, this one isn't a problem for anyone as it doesn't smell bad, take up space, leave behind anything offensive, or trouble others in any way.

Essentially, women who put their makeup on on the train are just using the time to do something other than peck at their cell phones or read and write inane text messages, and I'll miss seeing them do their thing in the face of what I view as an overly sensitive unwritten rule about "manners."
Posted by Orchid64 at 12:15 AM