Will Miss #275 - seeing your culture through new eyes 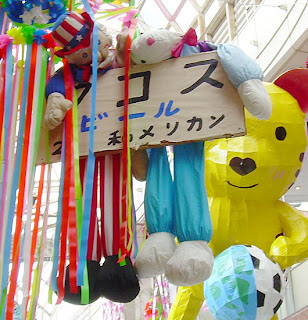 Uncle Sam may appear to be hung and slumped dead over that sign, but he's really hawking tacos and American beer.
There was a series of books published by Tuttle which is no longer in print called "The Adventures of Max Danger." In the second book of the series, the introduction talks about the perspective of an old Japanese woman who said that Americans are "big people...who believe their opinions are facts." I've come to learn that, for the most part, this is true. Americans do believe their opinions constitute facts and Japanese people rarely regard their own opinions with such solid belief in their foundation. Some of the ideas and views of Western folks by Japanese people are based on stereotypes and lack depth of understanding, but it's not uncommon for there to be wisdom about the nature of foreign cultures from those who have more experience with foreign cultures and a broader perspective of life.

Seeing my country through the eyes of the Japanese (when it isn't reflecting ignorant assumptions) has been incredibly valuable and enlightening and I will miss that.
Posted by Orchid64 at 12:15 AM