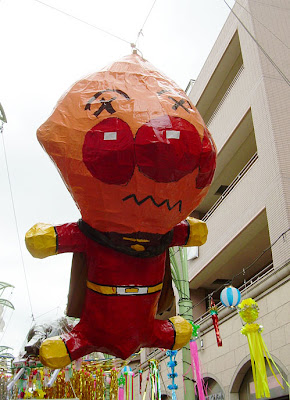 Poor Anpanman. He's had better days.
The Japanese overwhelmingly support capital punishment. Latest statistics put it at 85.6% support, and my personal experiences speaking to Japanese people about this issue completely fall in line with these numbers. You can compare this to the United States, one of the other few developed countries that allows for the death penalty (albeit on a state-by-state basis - some states allow it and others do not) which has an average support rating of 65%. Personally, I don't condone the death penalty, but that's not what this is about. The thing that gives me the heebie jeebies in Japan is that the method of execution is hanging. It seems like a particularly inhumane and archaic way to kill someone, especially when arguably more humane options (like lethal injection) are available. Also, often the executions are simply carried out without announcing that they are going to occur. This seems somewhat odd, cowardly and unfair to the family or the condemned, particularly in the face of such overwhelming public support.

I won't miss reading about execution by hanging in Japan.
Posted by Orchid64 at 12:15 AM