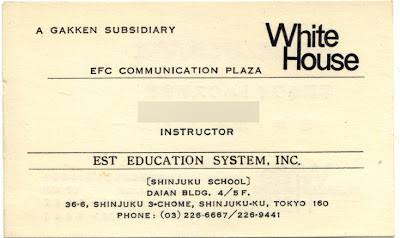 A business card from my husbands employer. The school has been defunct for a long time.

This is my last random memory related to working for Nova when I first moved to Japan. The other entries are here: first, second, third.

As I mentioned in my previous post, Nova had a bad reputation among teachers as a company that cheated employees. Given that fact, one may wonder why on earth I'd try to work there. The answer lay in the circumstances under which my brand new husband (married about a month before we went to Japan) and I found ourselves after moving to Tokyo.

He had secured a job first, but the company that had hired him, rather impressively named "The White House", had a policy of starting teachers out with a mere 25 hours a week of work. After an unspecified time of probation, they'd boost you to 35 hours. This was their way of limiting their losses in terms of damage to student relationships if they got a crummy teacher, but also it allowed them to call all of the shots for awhile. To that end, they pressured my husband to jaunt to Korea to do visa paperwork instead of allowing him to return to the U.S. and do it.

It's possible to do it in either country because you can do it anywhere outside of Japan that has a Japanese embassy, but one of their employees got it done in Korea in a few days and they were worried that it'd take as long as two months in the U.S. Because they had the carrot of an increase in paid time to 35 hours, he had to take the stick of going to Korea at not insignificant expense and with some nervousness. At that time, world travel was not what it is now and he had not prepared for such a trip back home. Resources in English letting one know what to expect were very thin in Tokyo, and the internet wasn't a thing then. It was, to say the least, more than a little intimidating, but he did it anyway.

This trip added to a pile of mounting start-up expenses during our transition from America to Japan. The entire business was going to cost 50,000 yen ($391 in 1989), and we were already on the hook for his plane flight and money he'd borrowed to travel and eat while he lived with his brother (who was already living and working in Asagaya in Tokyo). By the time we'd spent everything we needed to spend to get set up in Japan, we'd added nearly $8,000 to our debt pile. This was largely made up of the cost of getting an apartment which included a month's rent as "gift" money (aka extortion) for the landlord, another month to the real estate agency and the usual first, last and security deposit. The rent alone was a splash out of around $4,000 and we also needed to borrow enough to eat and live on until we started collecting our paychecks as well as minimally outfit the apartment to make it livable.

Considering this new debt as well as our mutual college debts, as neither of us came from families who could (in my case) or were willing to (in his case) pay our way through school, we needed to get a pretty decent income rolling between the two of us and his job wasn't going to give many hours up front. As I mentioned before, Nova had the benefit of paying pretty well fairly fast, and they were willing to take me despite my lack of experience. Because of the economic pressure, I took the job at Nova, and, as I'm sure was the case with many teachers, regretted it.

Though many who do not teach or never learned to teach well might dispute it, teaching is hard work. Being "on" and attentive to people for hours and hours without much of a break is draining. It is doubly hard when you've got three or four people peering at you intently as if they were inspecting some sort of bacterial sample under a microscope and they remain mute much of the time. Persuading students to do what they came there to do, that is, speak English, was often a Herculean task, and often a Sisyphean one as well. Whatever the case, intervention of some sort of Greek god would have been appreciated, but was never forthcoming.

One of the big problems working at Nova was that they had very few materials with which you were allowed to teach. Their core text was "American Streamline", a book which was actually fine in its own right, but did not address the needs of students who didn't have strong core capabilities very well. What was worse was that there were only 4 levels of that text and only 80 lessons in each book. Nova divided the lowest level students into 3 sub-levels, 7A, 7B, and 7C. Lower level students often made up a disproportionate number of the student body, and these students had these 80 lessons to complete to make it to the next level up (6) and start using the next textbook.

The problem was that doing these 80 lessons was not sufficient to boost students, especially the 7C ones who were at rock bottom, to the next level. You'd end up with people who had repeated the same lessons over and over again and still were not advancing. What was worse was that teachers didn't like doing some of the lessons in the book, especially those which were light on text and heavy on the teacher having to think of ways to practice grammatical structures, so you'd have the same lesson done 8 times and some that were never touched.

This left me as a teacher in a quandary most times. I could do as the lazy teachers had done and pick an easy lesson which allowed you to get students to read copious amounts of text to kill time, or I could do a lesson which was very taxing for me and required a lot of on the fly efforts to come up with ways to practice a structure. If I chose the former, the students who'd done such lessons again and again got irritated and frustrated because they were bored and knew they weren't advancing. If I chose the latter, I'd be worn out trying to pull teeth and having no respite from the text.

In the end, I generally decided to cover material least covered. This was because I cared more about the quality of what the student got than my own comfort or fatigue. In retrospect, I don't think it really mattered what I did because I'm sure not one student remembers that I gave them a lesson they hadn't had a dozen times before. It was mainly about self-respect and how I regarded myself as a teacher.

Beyond teaching from a limited range of books (they also used a pattern practice book for beginners called Side by Side, which many teachers also hated doing), there was the horror of the "Voice" room. This was a conversation lounge in which students sat around in more comfortable chairs to just "chat" with teachers. It was supposed to be more relaxing for all involved, but it was anything but for teachers. You were essentially stuck in a room with people who expected to be entertained and to do nothing to add to the conversation. If you got "lucky", you might get some windy businessman who felt that it was his right to hold the room entranced with stories of the minutiae of his business like precisely how many contracts he filled out and what exciting tidbits were entered into each field.

While teaching could be tiring, at least it had structure. Going into the Voice room was more loathsome to me than anything else about working at Nova. Unfortunately, students loved it because it was cheaper than paying for real lessons, and involved a fair amount of verbal wanking. It was all play and no work, and I often doubted that it really did anything to improve language skills. It was a pen in which the gaijin (foreigner) monkeys performed.

Working at Nova did do one thing for me and that was give me a whirlwind of experience in a short period of time. I taught so many people so fast that I got the hang of it within a short time. It was a sweatshop for language teachers, and by the time I'd quit two years down the road, it had given me something else, health issues. The stress and lies of working at Nova did a number on my body such that I developed gall stones. I was having attacks by the time I quit, and had to have surgery several months after leaving.

If I had to do it all over again, I would have taken a different job. I don't look back on my Nova experience with any fondness at all. While the experiences I had were of value, I think that they were not unique to Nova. Any school, including a better school that had a greater variety of teaching materials and a lighter workload with more preparation time, would have given me what Nova did, and it probably wouldn't have wrecked my health in the process.
Posted by Orchid64 at 8:00 AM