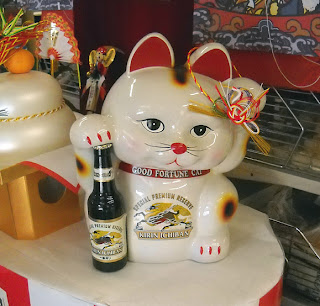 In an e-mail recently, someone asked me how I got my jobs in Japan. It wasn't until I'd written my reply that I realized that the manner in which I scored the few jobs that I had are actually pretty outdated by modern standards. Over the years, some things about job-hunting have changed, and others have stayed the same. Women are still preferred for jobs when teaching children is the work. They are also still paid less. Men are still preferred for business jobs, and young women in general are not preferred as teachers by older male students. Jobs that are oriented toward women still pay less than those toward me (again, teaching kids). And, everyone is still expected to include age and a photo on their resumes. That has all stayed relatively stable, other parts have, unsurprisingly, changed.

When I arrived in Japan for the second time in 1989, the big way that most foreign folks got jobs was via the print version of The Japan Times newspaper. The Monday paper had an extensive listing of classified ads and was the "go to" paper for foreigners who couldn't speak Japanese who wanted to make a living while exploring life in a foreign country. There were two other English language papers, The Daily Yomiuri and The Daily Mainichi, but their circulation wasn't as wide nor their papers as substantial. You could find some ads in them, but they tended to overlap with those in The Japan Times anyway. If you turned to them, it was generally out of pickiness or desperation.

Back then, jobs were divided into positions for men or women exclusively or for either. The women-only section tended to include hostessing work as well as the aforementioned jobs teaching children. They often included age cut-offs as well as nationality preferences. Americans were more often than not preferred because Japanese people felt more comfortable with their accents due to exposure to a larger amount of American pop culture and entertainment. It's also true that there are a lot of American businesses in Japan (and vice versa) and most people who study English do so for work. They want to hear the accent they expect to hear in their real life use of English. The preference for Americans remains true to this day with Canadians and British following second and third as more desirable English teachers. Australians remain the least favored due to the difficulty many Japanese people have with their accents.*

Hostessing work wasn't related to nationality. For those who don't know about hostessing jobs, they essentially pay women to sit and chat with men in pubs, bars, or clubs. The men drink and often get drunk and can get a little grabby, but it isn't a situation in which physical contact is an expected or even accepted part of the job. Needless to say, it wasn't the sort of work that I would do, particularly not as a newly married woman who came from a rural area and didn't feel comfortable navigating nightclubs or dealing with drunken Japanese businessmen. At the age of 24, I was young enough at the time to apply for such jobs as the cut-off age tended to be 26 or 28, but I wasn't adventurous enough or particularly interested. Frankly, I think it's got to be terribly hard work and quite stressful, though I had heard that the tips were large and one could make a lot more money hostessing than at other types of jobs that foreign women could do.

There were plenty of teaching jobs, but I needed something which would provide visa sponsorship and was full-time. My husband and I both had educational debts to pay, not to mention substantial start-up expenses from moving to Japan which we borrowed money from my brother-in-law to pay, and we needed as much cash up front to pay people and institutions back. A lot of jobs were part-time, didn't offer sponsorship, or required having had actual teaching experience. The ones that fit my needs and limits were not exactly available in abundance.

I can't speak to the current job market, but at that time, there were two main types of hiring techniques. One type of company recruited from abroad primarily (or entirely). My then-boyfriend-now-husband's first job was acquired via one of those types of companies. After he finished his Bachelor's degree, he interviewed at AMVIC's (a now defunct company) offices in California and they hired him from inside the U.S. and sent him over for training in Japan. This was the best way to get a job back then because there was a period of time during which you could not get a work visa from inside of Japan if you had a regular tourist visa. You had to get it from outside of the country. So, if you were hired from home, all of that got taken care of while you waited in the comfort of your own home. Those who had to be sponsored from inside of Japan often made a quick trip to Korea and applied at the Japanese embassy. It could be done from any country outside of Japan with a Japanese consulate, but Korea was fastest and cheapest.

The other type of company hired from within Japan (and a small number did both). Those companies tended to target people who were jumping from job to job and a current work visa could be renewed by a new company or people who had other types of visas (a spouse visa or permanent residence). One of the biggest companies that hired within Japan at that time was the notorious conversation school, Nova.

Nova was infamous even back then for cheating its employees. The manner in which it was regarded and the working experience itself is something I will cover in a subsequent post because it is far too vast to cover here. At any rate, because it was a huge company with many schools, it hired those who were inexperienced, it provided visa sponsorship, and it offered full-time hours. For a greenhorn like me, it was the fastest point of entry into a market that I had no experience in and I took the job when they offered it and was grateful... at least at that time. ;-)

Three years later, I was less green and back on the job market after recovering from gall bladder surgery. Once again, I turned to the Japan Times and found an ad for a temporary job at a company that didn't need face-to-face teachers. The truth was that I was totally burned out from teaching at Nova and the idea of not having to sit there and get stared at while metaphorically pulling conversational teeth was very appealing. That temp. job turned into 12 years of full-time work followed by about a half dozen years of part-time work from home concurrent with private teaching via a referral agency.

By the end of my stay in Japan, finding work as well as working conditions had changed greatly. Jobs were now found mainly online. Metropolis, a free publication in English, had supplanted the Japan Times as the print publication to run to for jobs. You could also look at their listings online, but Gaijinpot and other online resources were strong options as well. The changes weren't limited to using online resources instead of papers, but also the number of jobs relative to the number of foreigners seeking them had dramatically altered. Now, it wasn't enough to be breathing and foreign. If you want a really good position, it also helps to have connections and experience was much more valuable than before. The job I once held at a correspondence school that involved no face-to-face teaching and materials creation is one of the most desirable needles in the employment haystack. You only get that type of work when someone refers you or you get lucky in the job lottery.

My last job in Japan was working part-time at a language school in Shinjuku. I took that job for various reasons, and the experience of working there is yet another post that I'll get to later. However, I most likely got it because of the March 11, 2011 earthquake. When the mass exodus of frightened foreigners occurred, schools were left in the lurch by those who abandoned their posts with no notice to run home. I was ready to enter the world of working outside of my own apartment at that time and I saw a chance to strike while the iron was hot. I knew a school I wanted to work at, applied, and got hired pretty quickly and easily, but I don't know if that would have happened, even with my experience level and visa (I had a dependent spouse visa at the time).

Finding a job in Japan is a very different experience now as compared to what it once was. It used to be easy, and you just made sure to get that copy of the Monday Japan Times paper and start making calls or sending resumes. The simplicity of it was a reflection of Japan's boom times and the scarcity of foreign bodies. I didn't realize it at the time, but it was actually a golden age for foreign folks in Japan. That age is long gone. That doesn't mean you can't get work in Japan, but the bar is higher, harder to get over, harder to locate, and the rewards are smaller. I would still be more confident about finding a job in Japan than I am in the U.S., but I am fully cognizant of all of the advantages I had there (being female, blonde, blue-eyed, and very experienced), that are of no value whatsoever here.

*Note to Australians: Please do not get mad at me for this. It's not something I have power over, but a reflection of reality in terms of the market in Japan. I personally have no preference for accents or any type of English, but I do know that a lot of ads asked specifically for Americans, Canadians, or British teachers. I never saw an ad asking for Australians (or for that matter, New Zealanders) and had many experiences with students who avoided or did not like to be taught by Australians due to their problems understanding them.
Posted by Orchid64 at 8:00 AM