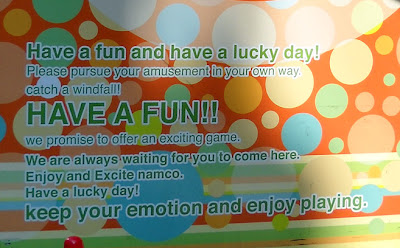 When I was a kid, I remember finding an odd fuzzy, finger-shaped thing with a metal cap and a beaded key chain on one end at my grandparents' home. I asked what it was and my grandmother said that it was a rabbit's foot. I asked her why she would have such a thing and she said it was for luck. These days, I doubt that many people have the decapitated body parts of unfortunate lapine creatures, but we still have things which we see as lucky like 4-leaf clovers, found pennies, and the bigger half of a wishbone.

That being said, luck does not tend to pervade our cultural habits the same way they do in Japan. Part of the New Years celebration includes taking a large container full of long sticks that predict your level of luck for the coming year. There are also good luck charms for various life events and activities sold at shrines all over Japan. Unless one is a gambler in the U.S., good luck charms occupy a very tiny part of their life whereas average people tend to buy or take part in luck-based activities in Japan.

The thing about all of the talk and engaging in actions related to luck in Japan is that people tend not to sincerely believe that luck will come their way. It's more of a way of sending positive energy or thought toward a particular outcome or simply a way to have fun. There was something appealingly light-hearted and attractive about the way in which luck is spoken of and dealt with in Japanese culture and I miss it.
Posted by Orchid64 at 8:00 AM