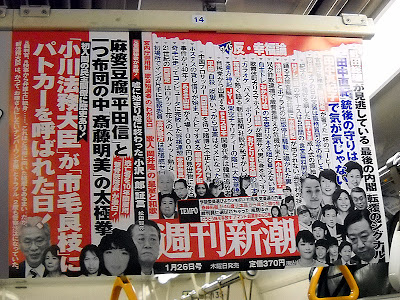 After 3 years in Japan, 2 of which I spent teaching English at Nova conversation school and the 3rd of which I spent recovering from surgery, I started to work for a company that sold and produced correspondence lessons. During the busy times, about half the year, I corrected student homework essays and talked to them on the phone for 5-minute "lessons". During the other half of the year, I helped to create the materials that were sold.

Early on, I ran into a culture clash between the aesthetic of the West and that of Japan. The president and others wanted everything to be crammed as full of content as possible and felt that white space made it look sparse and like we were lacking in content. One of my former students is a freelance graphic designer and she told me she has similar problems dealing with clients who want everything to be crammed and cluttered in layout and design.

This visual clutter is ugly and more stressful to look at. I don't miss this crowded graphic design aesthetic which I encountered not infrequently in Japan.
Posted by Orchid64 at 8:00 AM