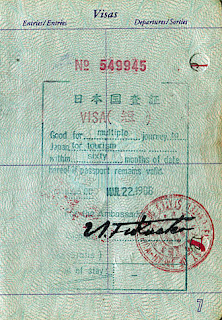 This is the thing that got me my first job in Japan.

Note: This is somewhat of a continuation from my previous post about getting jobs in Japan.

Some moments in life are burned into your memory with perfect clarity. This is not so strange. What is odd to me is that the ones you recall with photographic-memory-like clarity are not necessarily the ones that are the most meaningful. For instance, one of the happiest memories of my life is getting married to my husband in the world's smallest, simplest, and most economical of weddings. We were both happy to be doing it and wrote our own vows. However, the only "memory burn" I have from that day is standing outside of my in-laws' home (in which we were married) waiting for the music to reach the right spot so that we could walk in together. The emotionally deeper parts are only revealed to me via our poorly shot wedding video.

At any rate, you'd think that memories of my first day on the job as a teacher in Japan would be a pretty potent memory, but I don't remember it at all. I do have a flash of memory and corresponding emotion from the interview in which I "got" the job. I recall being very nervous and very hot and sweaty (because it was Tokyo in late spring and the weather was appropriate for steaming open a clam) and going into a large room with a white table with a guy wearing a dark business suit who spoke English slowly and adequately. He never made eye contact with me, and spent most of the time looking down at paperwork of some sort or another.

The first question the man asked me was about my passport. He wanted to see my tourist visa. I gave it to him and he looked at the 5-year tourist visa that I'd obtained about a year earlier when I visited my then-boyfriend-now-husband. After some careful inspection of the visa, he said, "we can change this visa," and handed me back my passport. From then, he proceeded to tell me about working conditions at the school as I waited to be "interviewed" further. I  was not asked any other questions. I was hired based on the type of stamp in my passport.

If you've ever wondered about the well from which the idea that English teachers in Japan are useless, worthless, and unskilled is drawn, this type of thing in the old days was a part of that. The demand for fresh blood was so high that conversation schools (eikaiwa) were less concerned with how well you could teach than they were with how quickly they could get your ass into a seat across from their students. My visa meant that I would not have to leave the country to process my paperwork. At that time, you had to pop over to a foreign country (most often Korea), and get this type of tourist visa from the Japanese consulate before you could qualify for a certificate of eligibility to get a work visa from within Japan.

In later years, this pointless requirement was removed. However, in the late 80's when I was there, this was a bureaucratic end-run around the idea that you weren't supposed to come to Japan as a casual tourist and then get a job. I'm not sure how my tourist visa made me different from tourists who didn't have such a stamp, but I'm guessing it had something to do with red tape that said you had to have the equivalent of a re-entry permit or some other such nonsense. In fact, my husband, who went to Japan shortly after our wedding to find a job first (while I remained in the U.S. and continued at my job), did not escape playing this game. He got a job, but he had to fly to Korea and stay for a few days while the paper pushers danced their little dance. That's what he got for not having the right stamp in his passport.

It's interesting to note that Nova, the joint that hired me, did not hire him because of his lack of said stamp. Though he had a year of teaching experience and interviews exceptionally well, they didn't want him because they'd have to process his paperwork differently. They didn't ask him any questions at his interview either. They took a total greenhorn (me) without question only because of this stamp. He was hired by a much better and quite a bit smaller chain of schools which ended up being a far better experience with more egalitarian working conditions. The experience of working at Nova back in the day is something I'll save for my next Wednesday post.