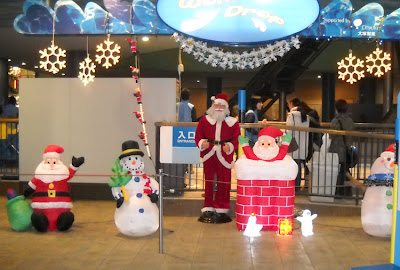 Santa didn't used to be fat. This is something that I learned with a little research. It seems that the image of Santa which has become quite popular comes to us courtesy of Coca-Cola. They thought that a jolly, chubby Santa was more fun than a severe, skinny one. I don't know if the rotund Santa is popular worldwide, but I do know that that is the only way that I ever saw him growing up in the U.S. and that is the way in which he's generally portrayed in popular culture.

In Japan, Santa is depicted at times as amazingly slim and trim. That's because they are working with the mannequins they have and they don't care about padding him out to fit some Americanized image. Besides, the Santa costumes at hand were sewn with a Japanese physique in mind. If you're going to dress up a figure, you don't want to have to custom order an outfit for the portly gentleman.

Among the many things that said, "Japan" to me, were the skinny Santas that popped up in various displays. I miss seeing the slender Santa as one of many little reminders that Christmas is something rather different in Japan.
Posted by Orchid64 at 8:00 AM