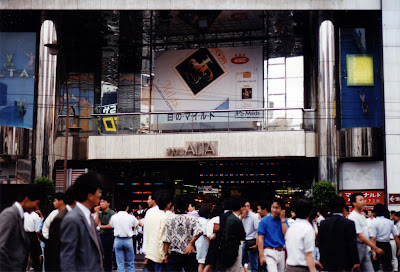 I once read a book written by a woman who believed she remembered past lives and could access future lives. The book was published quite some time ago, and one of the things she talked about enjoying in the future was interactive displays at stores. At the time the book was written, that seemed on the futuristic side. By the time I left Japan, such things were becoming increasingly common in Tokyo.

Upon returning to the U.S., I was surprised to learn that not all U.S. shops had the same level of technological advancement as some of the markets and department stores in Japan. Many of them had micro digital displays with pricing or even interactive advertising. The future described in that woman's book appeared to be happening "now", at least in Tokyo, though it is not yet here in America. 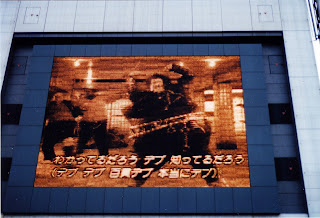 Given the pace of technological advancement and subsequent reduction in the cost of technology, it may be hard to imagine a time in the relatively recent past when something like a massive T.V. screen on the front of a building was pretty uncommon. Such screens were on display in New York City in the 80's, but they were relatively crude in terms of their capacity to show video compared to what was once the most famous display in Japan's capital city, the display at Studio Alta in Shinjuku. 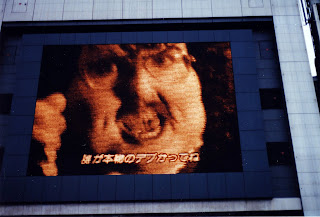 Back in those days, the video content that you could see playing on Alta was often hard to see anywhere else. There was no or limited cable and satellite T.V. so hanging out around Alta could often offer you a glimpse of something rare for the times. The photos in this post are of Weird Al Yankovic's "Fat" video, which my then-boyfriend was delighted to be able to see via the big screen since it was the only way he was likely to see it until he returned to the U.S.

Because Alta was such a visible building relative to others, it was often a popular meeting place for people who wanted a central place to meet others. It probably still is a common place to get together because you can watch the screen while you wait and everyone knows where it is. That being said, cell phones and the ability to call and announce your location make having such a well-known meeting place much less important than it once was. 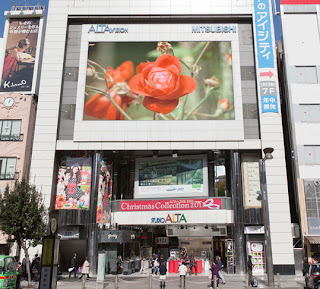 The current look of Alta is much nicer than it used to be, but then again, the need and value of it has greatly diminished as there are many such screens in Tokyo now. It is the largest high definition screen in Japan, but when your audience is so far away, I'm not sure that they can necessarily appreciate its qualities. In the promo shot above, you can see far fewer people in front of the screen than in the 1989 shot my future husband took at the top of this post. I don't know if the picture was simply taken at a less busy time of day, or if Alta's premiere spot as the meeting place du jour has changed with the times. I will always remember it as the central hub at which I met friends in the early days of my time in Japan.