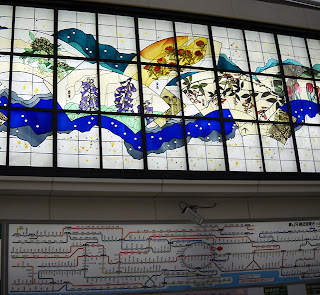 I've been on public transport relatively little in America, and that's because there is relatively little of such transport. What little "art" I tend to see related to such areas tends to be graffiti which has been scrawled by bored miscreants. While I do believe that some graffiti art is quite impressive, the vast majority is balloon words with faux depth and hastily scrawled words.

In Japan, because the train and subway stations are such a huge part of people's daily lives (at least in major metropolitan areas), they tend to be quite well kept and there is often an eye toward making them pleasant places to spend time. I saw the artwork and decor so often that I tended to only heed it when it was especially strange. Now, I have a greater appreciation for all of it rather than just the peculiar types.

The way in which art was used throughout Tokyo, even in areas which aren't necessarily the most glamorous, was an indication that there was a concern for making spaces more pleasant for everyone and I miss that attention to detail.
Posted by Orchid64 at 8:00 AM