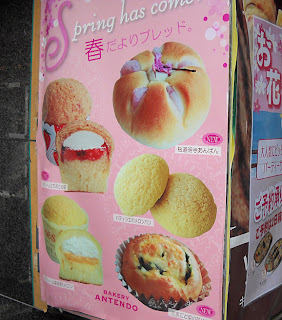 A selection of lovely bread products from the excellent bakery, Antendo.

There were all sorts of foods that I was looking forward to trying in America, and none more so than the plethora of whole grain bread options. The idea of walking into a store and grabbing a bag of Orowheat bread instead of having to make my own sounded pretty awesome. And it was, but the truth is that I'm still making my own whole wheat bread for other reasons.

While is has been convenient to have access to whole grain buns and bread, the truth is that the taste generally hasn't lived up to expectations. This is what happens when you grow accustomed to having either bread made in a good bakery (which we had in Tokyo) or homemade. I'm also, frankly, a little scared of the packaged food in the U.S. I have a feeling that it's packed with chemicals and other things which I wouldn't be ingesting if I made my own. That's probably a paranoia, but I do know that America has some of the most liberal laws when it comes to allowing additives in food.

So, while I thought I'd be pleased as punch to give up making my own bread, it turns out that that's a boat I'm still in of my own choosing. I guess that I really don't miss feeling like I have to choose between three tiny expensive slices of whole wheat or huge fluffy blobs of white bread or making my own, but I don't really feel I've gained much on this front by coming to the U.S.
Posted by Orchid64 at 8:00 AM