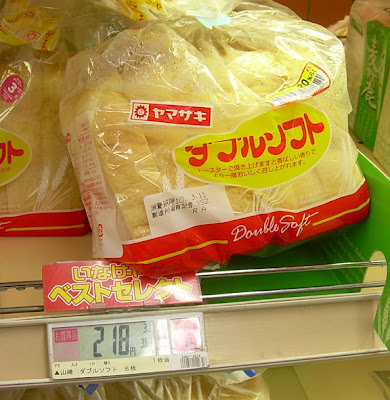 This bread makes gorgeous and decadent toast. Each slice is as thick as two regular slices, perhaps thicker. Coffee shops often use this sort of bread for toast and coffee breakfast sets. I never eat it.
Sometimes, things that are good in every way are not necessarily good for you. One of those things is Japanese bread. If I were to come as a tourist and dine on buttered toast and coffee for breakfast for a week, I'd be gratified at the delights of Japanese bread. Living here for a year or more is another issue entirely. Japanese bread is like cake. It's light, white, and fluffy. It's also generally cut to fairly fat sizes unless you track down skinny 8-cut bread. The main problem is that it's very fattening. An average slice is about 150 calories, and that's for an fairly normal cut slice (thinner than that shown above). There's also the fact that it's like a cushy pillow that easily flattens out. It's only good for the most lightweight sandwiches. This suits the Japanese habit of putting blobs of mayo with small amounts of egg or tuna in between two delicate (and crust-less) pieces, but it doesn't hold up to a nice pile of lettuce, tomato, cheese, and a slice or two of lunch meat.

I won't miss the tasty, but fattening Japanese bread.
Posted by Orchid64 at 12:15 AM