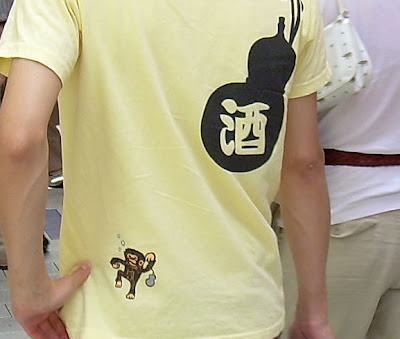 While I have an intense dislike for the fact that many people view foreigners who teach as little more than gaijin monkeys, I have to acknowledge that some people do act like said monkeys. A "gaijin monkey" is a foreigner who puts on an act to entertain Japanese people. Such people often treat Japanese people as if they were children who needed to be energetically amused at all times. This includes (but is not limited to) saying the same ingratiating or goofy phrases (often repeatedly), being loud, making faces, or gesticulating wildly. Unfortunately, you do see this among people who are teachers because they are conditioned during their initial teaching experiences to do this when it elicits smiles and laughter. Some students like it, and some really don't, but enough act amused by it to keep monkeys doing their shtick. Working next to one of these people is grating and embarrassing, and they frequently never learn to be professional or to actually teach since it's easier to keep up the monkey persona than to learn to do the job. What is worse, Japanese people start to think that any foreigner who isn't jumping on the table and making an ass of himself is unhappy about interacting with them and they believe that this gaijin monkey behavior is the norm in the person's native culture.