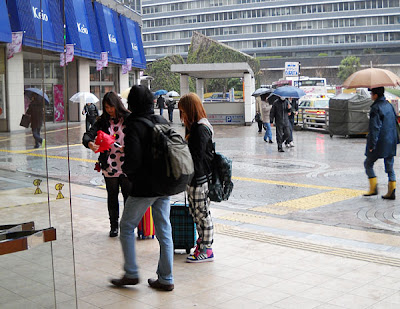 I think this is a "Tokyo thing". It might also be a "treatment of females thing", or even a thing that is related to being a foreigner. I don't know all of the variables, but for quite some time I've noticed that people act incredibly selfishly when it rains. I realize most Japanese people react to rain as if they were composed of sugar and might melt away entirely should the drops touch them, but some things gain one very little at the expense of others in the battle to keep dry. Most often, I notice that when there is a puddle on one side of the sidewalk and a cyclist is coming in the opposite direction, the cyclist will change sides to avoid the puddle and force me (as a pedestrian) to either walk through the puddle, stop entirely and risk getting hit by the oncoming bike, or play chicken and hope I win. The cyclist will not get wet feet by going through a puddle, but I will, yet they force me into the water over 80% of the time. Something that happens less often occurs when I'm caught out in an unexpected downpour without my umbrella. If I'm walking exposed to the full force of the rain and someone else has an umbrella, there is a good chance that the other party will walk under any sheltered area (like a shop's awning) despite having an umbrella and force me to walk full on into the rain or stand dead in the way. Again, they will do this regardless of "right of way".

I won't miss this petty and selfish behavior on the narrow sidewalks of Tokyo when it rains.
Posted by Orchid64 at 12:15 AM