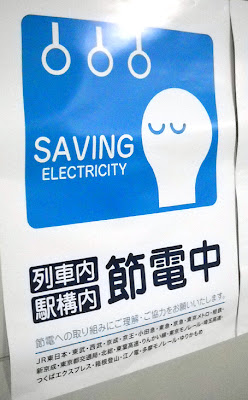 A poster asking people to conserve energy in the summer of 2011 due to the shortfall of energy resulting from the Fukushima nuclear power plant crisis.
During the cherry blossom viewing season in Tokyo after the Great Tohoku Earthquake on March 11, 2011, the Japanese government asked people who were accustomed to drinking and partying hard (and noisily) to use restraint. They weren't going to provide portable toilets or large trash receptacles because this costs money and requires personnel which were better funneled into disaster clean up and aid. I can't imagine that such a request would be made in other countries with the expectation that people would en masse voluntarily set their interests aside, particularly in light of the fact that a lot of people might truly need a rip-roaring drunkfest to blow off steam. However, the Japanese did show restraint merely because they were asked to. No police had to watch them like hawks. No threats of fines had to be issued. They just did it. This is part of what the Japanese call "jishuku" which refers to self-restraint.

I wouldn't vouch for the ability of any particular individual to control himself or herself, but, on the whole, the Japanese can show unusual self-control that reflects the selflessness that they are so often credited with.
Posted by Orchid64 at 12:15 AM