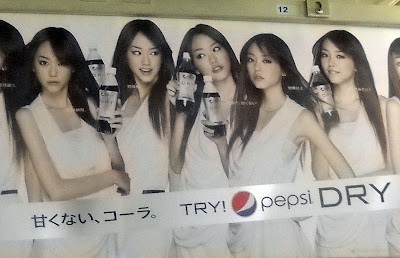 I look absolutely nothing like this woman, but I think she's supposed to be actually beautiful.
I've read on some blogs and forums that a lot of the women who marry foreign men are actually considered relatively mundane or unattractive in Japanese culture. I've also been spontaneously told by Japanese men and women (even at the ripe old age of 46) that I am "beautiful". My sense about both of these situations is that beauty is culturally very relative and what is exotic and lovely in the eyes of one culture is quite "average" (or less) in another. I have no illusions about my appearance. I'm neither a great beauty nor someone who causes people to avert their eyes. I know that it is the relative rarity of my blue eyes and my blondish red hair as well as the value placed on my pale clear skin that is eliciting the compliments, not any measure of my true physical impressiveness.

Everyone likes to be told that they are attractive, and I'm certain it's something that I'll only be hearing from my husband (which I value greatly) after I return home. I'll miss being told I'm beautiful, even when I'm not especially so.
Posted by Orchid64 at 12:15 AM