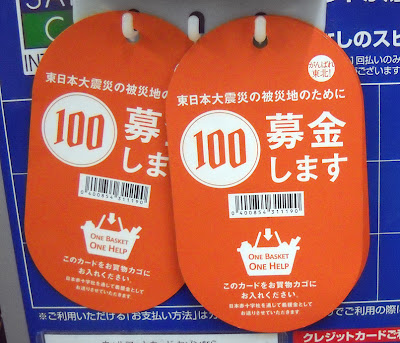 Tags near the cash register at Seiyu supermarket that you can toss in your basket and 100 yen ($1.24) and the money will be given to victims of the tsunami following the Great Tohoku Earthquake. These have been around for months and I have never seen one person toss one in their basket.

This is a tricky topic because people often confuse "charity" with "foreign aid". Note that Japan gives a lot of international aid per capita, though like most countries, that aid is "attached" and a form of corporate welfare*. In fact, they used to give more than nearly any other country, but have been eclipsed by the U.S. and China because of their long economic decline. That being said, as individuals, Japanese people do not elect to personally give money to charity much at all. The coin boxes to fund dogs for the blind are never full and usually you only see one yen coins in them. When I ask people about whether they have ever donated money to a charity, they say "no", and that they don't trust where the money is going or how it will be used. Despite knowing the money goes directly to a needy individual, they also never give money to the homeless. Compared to Western countries, individual Japanese are not a charitable lot and have a flimsy excuse for being tight with their purse strings.

I won't miss this lack of a charitable spirit, particularly when it comes to helping those in need in their own country.

*Most countries, including Japan, give foreign aid with strings attached which means building contracts are made with domestic companies such that tax money tagged as "aid" is essentially going to businesses back home. The countries receiving aid get new infrastructure and structures, but it's mainly done to rev up profits for corporations back home on the tax payers' dime. Even though Japan seems to have less "attached" aid than some countries, there are back door ways to add strings and claim they're not there. Very little "aid" is about helping other countries. It's mostly about benefiting the country offering it one way or another. How do I know this? One of my students worked for the Ministry of Foreign Affairs as a negotiator who goes abroad and tries to "win" the right to give money to countries in need (yes, they compete for who gets to give the money) and explained how it works to me.
Posted by Orchid64 at 4:00 AM