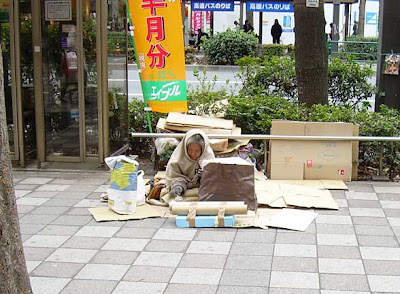 I'm not going to assert that the homeless are treated or regarded well in any culture, but most people in Western countries tend to view them with some level of compassion and there are many programs to help them in most cities. In Japan, the general attitude toward the homeless is quite different and programs to assist them are few and far between. They are viewed as failing to work hard enough or to maintain adequate ties to family. The attitude more often than not is that they could pull themselves up by their own bootstraps if they really wanted to and that they inconvenience and annoy the people who have fulfilled their role as "members of society". It is a rare Japanese person who I speak to who views such people with sympathy, and an even rarer one who chooses to slip them some cash occasionally to lighten their burden. (And, yes, I give homeless people in Japan who are set up like the lady above a thousand yen when I see them. They don't ask for it, but I lay down the note and they thank me.)

I won't miss the attitude that homeless people are little more than deadbeats who have somehow earned or chosen their fate.
Posted by Orchid64 at 12:15 AM