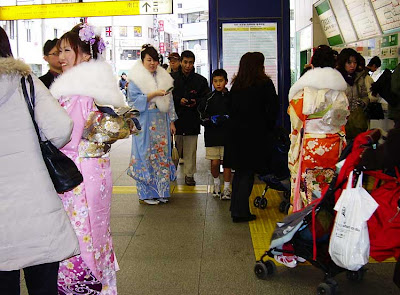 There are quite a lot of public holidays in Japan. In fact, it's surprising that the Japanese get more random days off than Americans. Few of those national holidays carry a great deal of meaning, but "seijin no hi", which is sometimes translated as "coming of age day" or "adulthood day" is one of the few which is observed in a very visible manner. On the second Monday in January, you see a lot of young women in kimono and young men in suits who have turned 20 in the past year gathering for ceremonies at city and event halls. It's always impressive seeing so many well-dressed and usually happy young people out and about. There's also a certain atmosphere about them as they are coming to terms with their change in legal and social status.

I'll miss seeing young people who have officially reached adulthood traveling about the city on seijin no hi.
Posted by Orchid64 at 12:15 AM