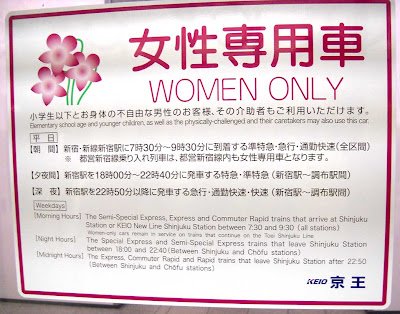 Click the image above to load one which is readable.
During my early years in Japan, when I was still young enough to be of interest to random men, I was riding an escalator down into a basement store to meet my husband. A man walked down the escalator behind me and touched my ass. I assumed at first that he had accidentally bumped into me after walking a step too far so I moved forward, and then he moved forward again and touched my behind again. At the time I was naive about a widespread problem in Japan, groping, so I thought he was just impatient for me to walk ahead and was nudging me. Now, I'm certain that both times he was intentionally groping me (particularly since we were the only ones on the escalator and he could have walked around me). The problem has gotten more attention in recent years, but it continues to be of sufficient concern that there are separate cars on trains for women so that they can avoid being fondled by men who can't keep their hands to themselves.

I won't miss these creepy men who think women are objects for them to play with.
Posted by Orchid64 at 12:15 AM