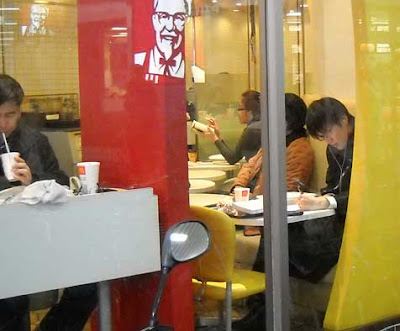 This may be an issue in cities around the world, but it's something I never encountered until I came to Tokyo. People will buy one drink at a coffee shop, fast food place, or restaurant and occupy a space for hours (literally). I can't say for certain, but I'm guessing this is one of the reasons that drinks are so expensive in general. They know people are going to do this so they want to make a profit for the loss of space in their establishment. I think people who do this back home might be eventually asked to buy something else or leave if it's a crowded place, but not so in Japan. Those of us who simply want to sit and consume our meals are displaced by those who nurse their coffee for three hours while they peck at their cells phones or read a book. I wouldn't mind if there were copious numbers free seats, but there rarely are.

I won't miss these squatters who make it hard for a paying customer to find a place to eat.
Posted by Orchid64 at 12:15 AM