Won't Miss #138 - no one taking responsibility 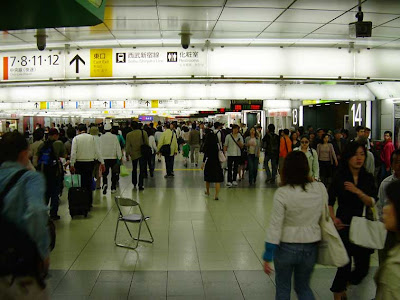 Back when I was working in a Japanese office, we had continuous difficulties with things that were not getting done because the person who should look after that particular duty was not exactly specified. There were plenty of ridiculously obvious problems that could be solved in a short time with almost no effort that would be ignored because no one was willing to just do it without some sort of official authorization. This would include things like throwing out an old, abandoned computer that was in everyone's way, cleaning the microwave oven when it was covered in food spatters, or tracking inventory to make sure we had enough materials for clients (or didn't order more of material that we had too much of). Like the chair in the middle of the mob of people pictured above, people would go around a problem that could easily be solved if someone would just take it upon themselves to just deal with it. Japanese people don't just take things upon themselves for the most part because they are unwilling to risk the illusion that they are usurping someone's prerogative.

I won't miss the tendency of people to go around a problem just so they don't have to take responsibility for taking the initiative without authorization.
Posted by Orchid64 at 12:15 AM