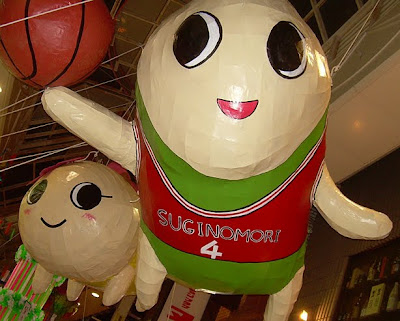 It seems that nearly everything in Japan has to have a mascot. In many cases, they are crudely drawn or poorly designed. You get the feeling that some of them were just created by someone in the office who could doodle a bit rather than by a professional artist. The ward I live in has some peculiar worm-like creature called "Suginomori". It's all over the place in my neighborhood - on signs, on various bits of junk at festivals, and recently I've even seen cookies sold with its image. After all, who doesn't want to eat a cookie with a picture of a weird worm thing on it? What is more irksome is knowing my city taxes are funding the proliferation of this crude mascot.

I won't miss seeing this ugly city mascot on a nearly daily basis.
Posted by Orchid64 at 12:15 AM