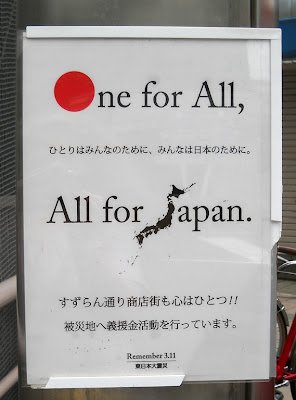 Though I grew up in western Pennsylvania, where there are no earthquakes, I did experience the earth shuddering on a regular basis. My family lived near coal and strip mining operations. The use of explosives a safe, but palpable, distance away commonly shook our house. Also, we lived a very short distance from a dirt road that huge trucks roared down, causing objects in the living room to rattle on their end tables. Despite my experience with this type of thing, it does not compare to earthquakes because of the unpredictability of the intensity and duration. After a strong quake, people can experience what the Japanese call "jishin (earthquake) yoi (drunkenness)." This is when you think the room is moving but it is not. After the March 11, 2011 quake, reportedly 75% of people suffered from it. I personally felt it for weeks afterward.

I won't miss feeling like the room is moving even when it's not.
Posted by Orchid64 at 12:15 AM