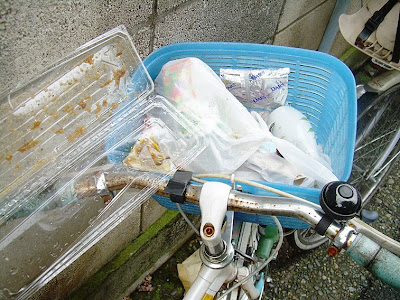 Both Japanese and non-Japanese alike remark on how clean Japan's big cities are, and this is true. Generally speaking, Tokyo is remarkably clean. The lie comes in when people attribute this cleanliness to some innate quality of the Japanese people. This is simply not true. I've seen more overt littering in Tokyo than I ever saw when I lived in America. Drink cans are left on the sidewalk, garbage is stuffed into the baskets of bicycles parked along the sidewalk, and people toss used tissues, plastic bags and receipts from convenience stores to the ground when there isn't a handy trash receptacle. In fact, the lack of public trash bins (aside from those in front of convenience stores) is part of what encourages the willy-nilly tossing of trash around. The lie is that Japanese people are clean in general.

I won't miss the repetition of this myth flying in the face of the reality I witness first hand.
Posted by Orchid64 at 1:00 AM