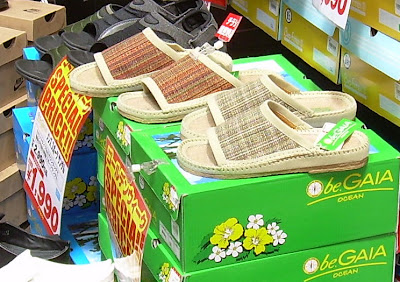 My husband got a pair of Birkenstocks that had been worn twice by their previous owner via Freecycle in Tokyo. We had been having problems finding a new pair in his size (and he doesn't have big feet!) and were delighted when a pair that were big enough showed up in the Freecycle mailing list. My friend Shawn had a bit of an "ick" response to the idea that we'd accept second-hand shoes, even ones that clearly were worn less than a handful of times and were stored in their original box for quite some time (allowing any cooties to die of old age). If second-hand Birkies worn by one person freak you out, then you may want to avoid Japan. In some restaurants, hotels, inns, and other popular tourist attractions, you are required to remove your shoes and put on slippers worn by other people... worn by hundreds of other people, some just minutes before you put them on.

The idea of sharing slippers with vast numbers of people is something I won't miss.
Posted by Orchid64 at 12:15 AM