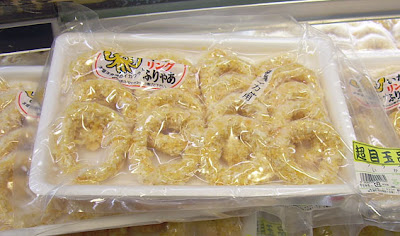 Early on in my stay in Japan, I would see packages of "onion rings" like the type you see above. Unfortunately, they did not have a little cartoon on them so I was in for a rude awakening. I realize that there are some people who love squid, but it's like chewing on an eraser to me. Seeing these battered squid rings always brings about an initial positive conditioned response which is always followed by a sense of letdown.

I won't miss squid, where I least expect it and even where I most expect it.
Posted by Orchid64 at 12:15 AM