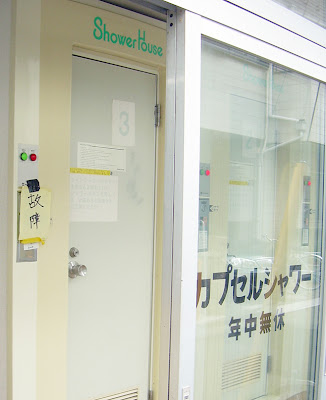 A lot of hoopla has been made about capsule hotels in the West so many people are aware of these tomb-like spaces meant to allow people to sleep on the cheap in expensive areas. The truth is that capsule hotels are losing some of their appeal these days because business is changing in ways which aren't allowing for the expenses that brought people (mainly men) to use them. They're still around, of course, but not as popular as they used to be. What many Western folks don't know is that "capsule" service isn't confined to hotels. There are also things like capsule showers, for instance.

I like the inventiveness behind using small spaces in these ways and what it says about the willingness of Japanese folks to accept what is adequate in exchange for a lower price and easy access, and I'll miss it.
Posted by Orchid64 at 12:15 AM