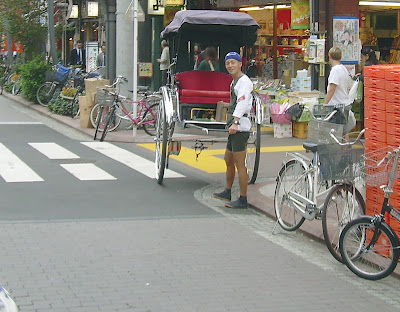 Public transportation in Japan, through the eyes of my old mum.
When I was growing up, I loved to look through the old pictures my mother had from her youth. One of those pictures was of a Japanese man with two children who was once her penpal when she was in high school in the 50's. My mother's knowledge of Japan was frozen in the time he wrote to her and whatever pop culture misconceptions she picked up about Japan from popular culture. She never thought Godzilla was stomping down Tokyo, but she did think that I could grab a rikshaw from the airport to my apartment when I came here in 1989. And, raise your hand if you live in Japan far from the Fukushima reactor but had family freak out because they had no idea how far point A is from point B in this country and they never bothered to find out. On the fear scale, people tend to overestimate the danger of the unknown and mitigate it when it is known.

I won't miss the ignorance people back home have about life here and how it causes them anxiety or to reach wildly incorrect conclusions about what I should or can do here.
Posted by Orchid64 at 12:15 AM