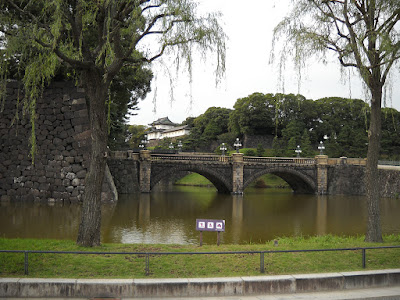 Early on in my time in Japan, I visited the imperial palace and after a long time, I forgot what it was like so I went back last year. Now, I have a much better idea of why I retained no memory whatsoever of the experience. Visiting the imperial palace in Tokyo is a singularly unmemorable experience. In fact, after having gone there and remarking on that fact to Japanese folks I know, their response was "why"? They couldn't conceive of any reason to bother. Yes, it is a nice, well-maintained space, but you can't get close to the palace itself (see the view in the picture above) and it's mostly moat and grass with a few bland-looking buildings and bridges. I think it mainly functions these days as a space with a convenient track running around it for joggers. I also can't help feeling that the royal family, who rarely stick their heads out for the public to see, are like birds in a lightly gilded cage in there. Thinking about them when I visit just makes me feel sorry for them.

Compared to some of the more impressive sightseeing spots in Japan, it's really pretty "blah", and it is an area I won't miss.
Posted by Orchid64 at 12:15 AM