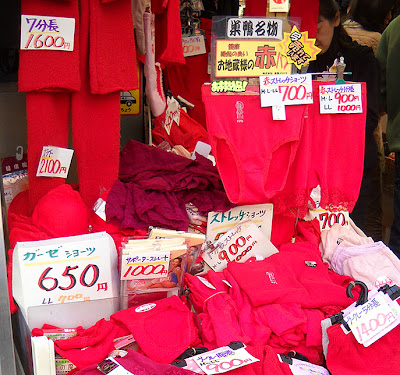 I'm not a big subscriber to the "weird Japan" mentality. One of the reasons I don't get so into it is that so much of it is clearly manufactured to be novel (e.g., maid cafes) and is little different than similarly generated oddness in other cultures which links not to human nature, but calculated commercial interests. However, when the weirdness manifests as a small component of a larger "normal" aspect of culture, my interest is piqued, and that is where we arrive at "akapantsu" or "red underpants". Sugamo is an area of Tokyo with a shopping district, Jizo Dori, which is described as an old folks Harajuku. The shops carry items of interest to the grey-haired set, but they also sell red underwear which is popular because the color red has positive associations in Buddhism. In particular, it wards off disease. So, many elderly flock to the red undies store and purchase over a million of them a year in order to gird their loins with red hot undergarments.

I will miss this odd contradiction in the conservative nature of older Japanese people and the way they dress and behave with an attraction to buying colorful and flashy underwear.
Posted by Orchid64 at 8:00 AM