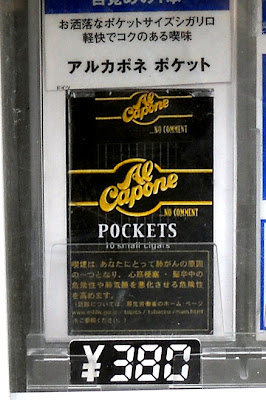 At lunch recently with a new acquaintance, she remarked that she felt all Caucasians should spend some time in Japan to begin to get a clue of what it feels like to be a minority in their home countries. One of the experiences which certainly breeds empathy for black folks back home is not being picked up by cabs. Another is being followed around in stores. This generally happens in larger spaces, though not necessarily expensive shops (it happened to me in a Daiso 100 yen shop, among other places). I'm not sure what motivates it, but it has happened to me despite my feeling that I neither resemble a kleptomaniac granny nor a thieving hood. Usually, a plain-dressed man tries to surreptitiously case me as I browse the store looking at their goods. He could think he's going to catch a thieving foreigner stuffing goods in her pockets. He could be just rude and acting on curiosity.  He may simply be interested in exactly the same goods as me and coincidentally following the same meandering path throughout the store as I am and think that I'm reverse-following him and that's why he's glancing at me so often. He may find the upper-middle-aged foreign lady so hauntingly beautiful that he can't resist her charm. He might even be a salesman applying his trade in some bizarre stealth fashion and awaiting just the right moment to pounce. (Note how all of my theories become more and more bizarre as I carry on... this is called thinking like an apologist.)

Whatever the reason for this bad behavior, I won't miss being followed around in Japanese shops.
Posted by Orchid64 at 8:00 AM