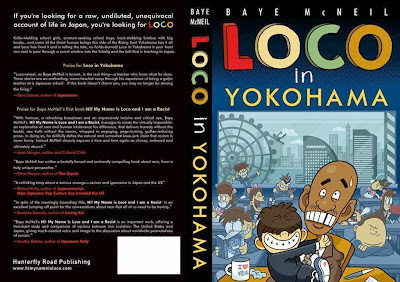 Loco's book is currently available as an e-Book for the low price of $2.99. I heartily endorse it, as you'll see if you're patient enough to get through most of my inane prattle.

Quite some time ago, I read a book called “The Origin of Consciousness in the Breakdown of the Bicameral Mind” by Julian Jaynes. No, don't go look it up. You're not going to want to read it. It's heady stuff and of interest mainly to people who enjoy talk about historical texts and the analysis of language in order to extrapolate something about the psychology of our ancestors. I will just say that the general idea of the book is that humans didn't always possess a conscious mind as we do now.


When I speak of our current consciousness, I mean the way in which we talk to ourselves in our own heads. You see a couple on the street and the woman looks angry and the man is touching her arm and talking softly to her. You wonder if they just had a fight and he made her mad and is trying to calm her down or make amends. That “wondering” is you talking to yourself.


In Jaynes's book, he makes a case for our minds not always working in this fashion. He postulates that we used to actually have conversations like a schizophrenic has audio hallucinations. That is, humans in the past used to hear a voice that does not sound like theirs and that they interpreted as being not their own. He felt that this was interpreted by those with such “bicameral” (two-sided) minds as the voice of God. Our own personal deity was instructing, advising, and interpreting for us according to his theory. Instead of you wondering to yourself whether or not that buy pissed off his girlfriend, your own personal god was saying, "Hey, that guy is mad," and you would say, "I see. Thanks God! I couldn't have figured it out without you, man."


It's a fascinating postulation, and it cannot be proven in any way. However, it would explain why many cultures had a lot of different gods in their religions. With so many minds hearing so many different unique voices, there would have to be more than one god to encompass the perspectives and individual experiences of reality that each person was having. Creating a god of love, of peace, of war, of hedonism, etc. would allow for a way to understand the reality and represent the thought processes of each person or groups of "like-minded" people.


Inhabiting the reality of other people is a tricky business, and we do not tend to operate in a world in which we have a bunch of gods to represent various perspectives anymore. Each “inner voice” which is a part of an individual's consciousness is relatively private. The only way that we can come to understand to some extent the reality that another person operates in is through their relating of their unique stories, feelings, and opinions. For me, the beauty of writing has always been that it allows me an opportunity to help others see what it is like to live in my skin and live with the particular “voice” in my head. The beauty of reading is that it permits me to gain a window into reality as others experience it.


The reason that humans have a rich tradition of story-telling throughout history – a tradition which predates writing and started with handing down stories orally – is that most of us value this sort of perspective broadening. Though we often want to negate the experiences of others when they do not synchronize with ours, I believe on some level that we are seeking to know their reality. We want to know what secrets go on behind the eyes of other people because they will confirm something about what goes on behind ours.


If you ever wondered why people in Japan read Japan blogs when they already have firsthand experience, and, indeed, some who believe they have seen and know it all read most vociferously (and argue), it's because somewhere in their smug complacency, they know someone has had some unique experiences that they have not. They want to know them, even while saying they don't need to. I feel that we all need to be open to reading about the experiences of others, especially when they come from someone who lives in a “skin” which is very different from our own. You can't fully understand what it is to be another person or to do the work they do with the people they do it with, but you can at least get a taste.


To that end, I want to talk about Baye McNeil's second book. It's a book that I've already read twice. In fact, I edited his book for him because I respect his talent and story-telling ability so much that I wanted to be a part of his growing career as a writer. If you read his first book, you know that he is an energetic, entertaining, and humanistic wordsmith who has lived a life in Japan which few of mainstream Japan bloggers have lived – and that none have written about so well. There are bloggers and there are writers and, as I've said before, Baye is a writer.


Baye's second book is rather different from his first in that it is focused more upon the people of Yokohama and his anecdotes from his time with them. It contains multiple slices of his life that come together to form a tasty “cake” with delicious nuggets that sometimes shock and often delight. You'll be reading along and you'll bite into a chapter and be surprised at that spicy little tidbit hidden in the fluffy content. You'll find something bitter that shocks you, or something super sweet which warms your heart.


I lived in Japan for 23 years, and had a lot of experiences during that time. You might think that I saw and lived it all, but there is very little overlap between Baye's life there and mine. In terms of the types of people he has met, the relationships he has had with them, the places he has been, and the things that he has done, we have little in common aside from our sensitivity, astute observational skills, and desire to analyze and understand and to grow from our experiences.

The only thing we have in common in terms of our Japan experiences is a general experience with prejudice, and even then, beyond the oh-so-common “empty seat”, there is a marked difference in how each of us encountered bigotry in Japan. This book was engaging to me despite my vast base of knowledge and experience because, I did not work where he has worked and certainly did not have the experiences with (frankly, somewhat scary) children that he has had. And, rather obviously, I'm not a black man. That does make quite a difference in how you are related to by the Japanese. If his stories are “cake”, then mine are “pie”. They're both sweet, but the texture and substance are quite different.

Comparing his book to a confection is actually somewhat inaccurate as it may imply that it lacks weight or heft. I will say that it is not nearly as much about self-revelation as his first book, but that would be impossible given how personal it was. His second effort is as much or more about Japan and the Japanese people than about Baye, but it is a perspective on them that only Baye possesses. It is his inner voice, or "personal god" if you like, and the only way you can also hear it is through his stories. It's a voice worth hearing, and I hope that my readers will consider listening.
Posted by Orchid64 at 8:00 AM