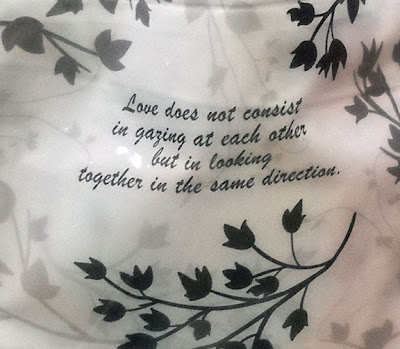 This is part of an ongoing series in which I talk about my experiences working for a Japanese company for 12 years. The other parts are here: 1, 2, 3, 4

In the previous post, I talked about some of the reasons that I stayed at my former company despite being treated unfairly and being at the mercy of an idiosyncratic and sometimes mercurial president. The biggest reason, however, is that it afforded me one opportunity that I almost certainly would not have had elsewhere. It allowed me to work side by side with my husband.

After about 6 years of working at a language school, my husband was having persistent health problems that would not improve. He had been the manager of one of the schools for a few years and later stepped down to be a co-manager. Finally, he decided he'd prefer to just be a teacher.

While the idea of managing may sound great because there's no actual teaching involved, the truth was that dealing with Japanese management was a cryptic and difficult experience. His Japanese superior was a mumbly, incoherent man who even the Japanese office ladies could not understand when they were all communicating in the same native language. He expected his subordinates to magically intuit what he wanted to have done and when my husband didn't do this, he'd blame him for any misunderstandings.

It was always my opinion that this sort of indirectness, especially come from the top, was their way of making sure that they never had to be responsible for anything. If they were unclear and you were responsible for guessing at what was wanted and things went badly, you could be held accountable. Of course, it could simply be that this guy and others like him really simply couldn't make themselves understood because they were raised in a culture in which indirectness was seen as a virtue.

As the economy tanked and his company down-sized, he got shuffled to a branch that remodeled in such a way as to place a smoking area right next to the teacher's prep area. Since a part of my husband's health issues was that he had developed asthma and throat problems, this was intolerable and his (gaijin) supervisor was indifferent to his problems. People had to be able to smoke and they couldn't smoke near anyone except the lowest employees on the totem pole. That would be, of course, the foreigners.

I encouraged my husband to quit and rest so he could get well. He did so and focused on going to school to study Japanese for about a year when it occurred to both of us that he could work as a temp during the busy season at my company if they'd take him. My Australian boss didn't want him to work there because he was afraid that he'd be replaced with someone who would work at a lower salary. He was very agitated and told me this outright after my husband mentioned his interest in working there to the president, but my husband had no interest in displacing my boss at any salary. He and I just wanted to have extra income and work together.

For about 9 years, my husband and I were able to work together for between 5-8 months of the year. This may not sound great to many people, but we are unusually attached to one another and this was very important for us. The single biggest reason that I stayed at my job for as long as I did was that we could commute together, sit in our cubicles together, and have lunch together. Despite all of the disadvantages of the job, this one thing kept me there. I only entertained quitting when business tanked so badly that hiring a full-time temporary teacher looked extremely unlikely and we knew that our days of working together were over.

The truth is that it was extremely unusual for a couple to be allowed to work together as we did. My husband's former school, the one at which he'd been a manager, would only employ couples if they worked for separate branches and it is Japanese custom for Japanese employees who married after meeting in their company to be moved apart after the wedding. While the president of our company was a childish, interfering, and unfair employer, he did give me one thing that I was unlikely to get anywhere else - the chance to work with my husband.

The end of our time working together felt like it was the end of the company coming up on us, but the president managed to pull a rabbit out of his battered old hat, and that's what I'll get to next time.
Posted by Orchid64 at 8:00 AM