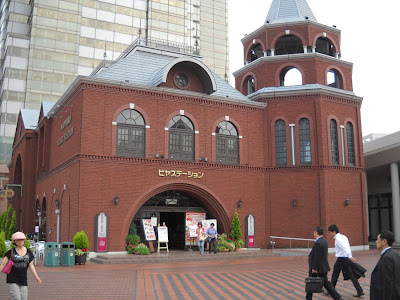 There is a certain ebb and flow to life in Tokyo that I have not found since returning home. It's possible that New York City carries the same vibe, but I somehow doubt it. The way it works is that there is the rush and crush of life centered around the stations. The closer you are to one, the more people there are and there is an enormous concentration of shops. As you move out, you discover that there are more unique places - offbeat little shops and restaurants, often along the shopping streets or shotengai.

As you move still further out, probably in the range of 15-30 minutes from a major station, you find oases of larger space and tranquility. Some of them are new and refined and others are old and traditional. In Ebisu, one of the nicest of these spaces is the Ebisu Garden Place area. It's unusual in that it has vast open areas that you can stroll through and it is far enough from Ebisu station not to attract enormous crowds of casual shoppers. Most people will go there because it's their destination, not because they stumbled across it.

The area is amazingly clean and almost breathtakingly vast in the feel of its spaces. It also has a European feel to it while still retaining an essential Japanese quality. There's a mix of the posh and the pedestrian in terms of the shops and restaurants. There's a Burger King and a Krispy Kreme as well as the insanely expensive Joel Robuchon restaurant. I miss having access to this little oasis in the city.
Posted by Orchid64 at 8:00 AM